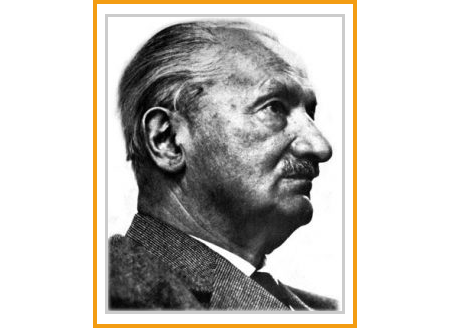 German philosopher and seminal thinker in the Continental tradition and philosophical hermeneutics. Born in Messkirch, Germany 26 September 1889. Died in Freiburg im Breisgau, 26 May 1976.

Martin Heidegger is widely acknowledged to be one of the most original and important philosophers of the 20th century, while remaining one of the most controversial. His thinking has contributed to such diverse fields as phenomenology (Merleau-Ponty), existentialism (Sartre, Ortega y Gasset), hermeneutics (Gadamer, Ricoeur), political theory (Arendt, Marcuse, Habermas), psychology (Boss, Binswanger, Rollo May), and theology (Bultmann, Rahner, Tillich). His critique of traditional metaphysics and his opposition to positivism and technological world domination have been embraced by leading theorists of postmodernity (Derrida, Foucault, and Lyotard).

Since 1967, the Heidegger Circle has met annually to discuss the thought and writings of Martin Heidegger.

The Heidegger Circle is committed to the understanding, interpretation, and advancement of the philosophy of Martin Heidegger.

Statement on Professional Respect and Inclusivity

The Heidegger Circle is committed to sustaining a climate of professional respect and inclusivity. We do not tolerate discrimination or harassment on the basis of race, ethnicity, nation of origin, sex, gender identification or expression, sexual orientation, disability, socioeconomic class, age, and/or religion in any form. We expect that anyone who participates in the Circle’s activities respects and upholds this commitment. Publications and papers presented at meetings of the Circle should use gender-inclusive language, except when quoting sources that do not. All events organized for the Circle should consider accessibility and strive to be as inclusive as possible.

Structure and Purpose of the Program:

How to get involved: